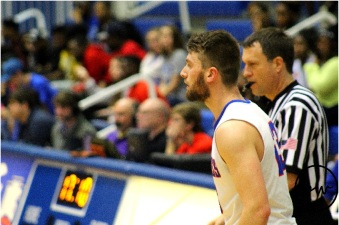 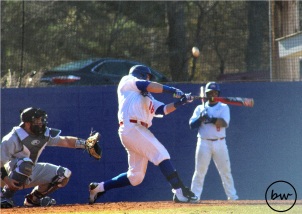 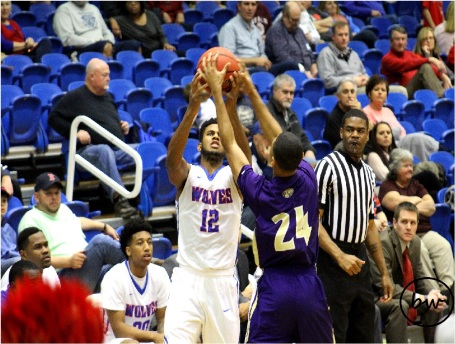 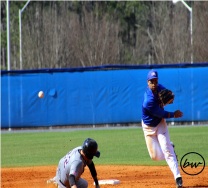 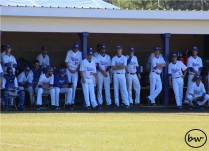 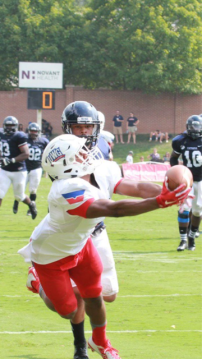 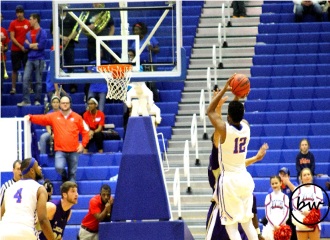 I was in Ranburne, Alabama this afternoon to watch the Ranburne and Bremen High School baseball teams face off. With only a handful of wins on the year, the Ranburne Bulldogs were looking to turn things around against a sub .500 Bremen team. Earlier in the year these teams faced off at Bremen High and the Blue Devils took home the win, 14-4.

#1, Junior Wade O’Neal, got the start for the Bremen Blue Devils and ended up pitching the entire game. They were up first to bat, but could not put any runs on the board.

Ranburne then got their first look at Wade O’Neal, and they could not get anything going either. They were able to get runners on third and second, but a nasty curve ball got the RHS batter to strike out looking and end the inning. Heading into the second inning, the score was all knotted up at 0-0.

#15, Freshman Brant Ivey, was able to reach 1st base in the top of the second. He reached on an error by the first baseman (dropped ball). He was then out at 2nd base on a fielder’s choice that allowed #10 sophomore Hayden Jones to reach 1st.

After that, #6, Junior Chandler Scott, singled to right putting a runner on first and second. The momentum did not last long though. The next batter, #9, freshman Ben Barrow, hit into another fielder’s choice. This was third out and the Blue Devils went into the bottom of the second still with no runs on the board.

Errors were a huge problem for the Bremen defense today as they proved to be crucial in their defeat. The first batter for RHS reached on an error by the 3rd baseman of Bremen, and he ended up scoring later that inning. Heading into the third inning the home team Ranburne Bulldogs had the 1-0 lead.

Bremen threatened again in the 3rd inning. After #2, freshman Carson Cook, grounded out to the pitcher, the top of the order was now up. #8, senior Kolbie Kenerly, singled and then advanced to second base. He then stole third, putting himself in prime scoring position with only one out.

Unfortunately for the Bremen faithful, the next two batters, #3 sophomore Sam Thompson and #12 senior Dylan Kierbow, both struck out. This ended the at bat for the Blue Devils and they remained scoreless.

Wade O’Neal started this at bat off by striking out the first RHS batter, and then getting the second to groundout. This was followed by a batter being hit by a pitch and a single. After a wild pitch, runners were now on third and second base with two outs. O’Neal was able to close out the inning though, as the next batter flew out to center and no runs scored.

In the fourth inning, it looked as if Bremen would definitely get some runs on the board, but they again came up short. It started off with a #11, senior Will Thomas, single. The next batter, Brant Ivey, hit into a fielder’s choice. Now there was one out, and Ivey was on first base.

After a fly out by Hayden Jones, there were two outs with a runner on first. Chandler Scott then came in clutch for Bremen as he singled to center, which advanced Ivey to second base. Then, a perfect bunt by Ben Barrow loaded the bases for Bremen. After two consecutive hits which loaded the bases, Bremen had picked up some momentum.

Unfortunately, Carson Cook couldn’t keep it going as he grounded out to the pitcher, ending the at bat. Three men were left on base for the Blue Devils, and it was now Ranburne’s turn in the bottom of the fourth.

This was a very short inning as Wade O’Neal got 3 of the first 4 batters to sit down. Heading into the fifth inning, Ranburne was still on top 1-0.

The fifth at bat for Bremen was even shorter than Ranburne’s in the fourth as the first three batters grounded out.

Ranburne took advantage of Bremen’s missed opportunities as they added 3 more runs in the fifth inning. The first batter singled and the second batter doubled putting men on first and second with no outs. O’Neal then got the third batter to groundout, and no runs scored.

That was not the case for the fourth batter of the inning though as he singled to left-center, driving in two runs. The next batter grounded out, and then the errors took over again for Bremen. What looked to be a simple pop-up was dropped by the infield and the runner on third was able to score, making it 4-0. Bremen coach Tim Hanegan met with his team on the mound after this and was not very happy at all. 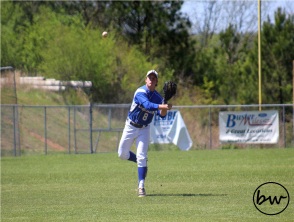 He scolded his team for not communicating on the fly ball. They allowed it to drop and it directly contributed to a run scoring. Hanegan stayed with O’Neal after this though, and the next batter grounded out. Ranburne’s lead had now extended to four runs.

The 6th inning was another short one for Bremen as the first batter, Will Thomas, walked, but the next three were retired. This put us in the top of the sixth with Ranburne still on top.

Two more Bremen errors allowed runs to score this inning. One was a strikeout but the catcher dropped the ball and then botched the throw to first, starting the inning off. That was followed by a bad throw by the third baseman which allowed runners to reach first and third.

The errors were followed by a double and a single, which scored two more runs for Ranburne. Finally Bremen got the last out, and was now facing defeat if they could not put up 6 runs.

No runners could get on base in the last at bat for Bremen and the game ended with the home team on top, 6-0. Bremen falls to 8-10 on the year after this loss.

Each team only had five hits on the day. So, you can tell how crucial the errors were for Bremen.

Wade O’Neal takes a loss for the Blue Devils. He pitched a full game (6 innings), gave up 5 hits, struck out 2, walked 1, and hit 2 batters. He only gave up 2 earned runs this game, as all the others came via errors by his infield.

I have recently started an internship at Gradick Communications, a radio station, in Carrollton. This is why I have broadened my horizons to include High School Sports as well. I will 100% still be committed to covering my school, the University of West Georgia.