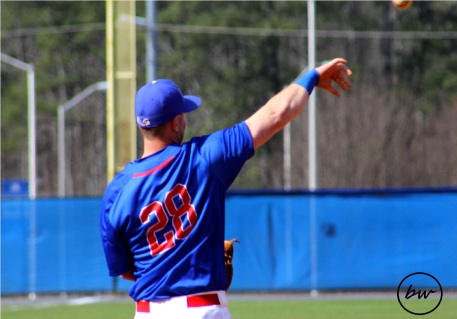 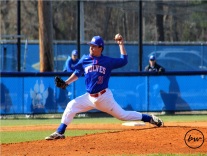 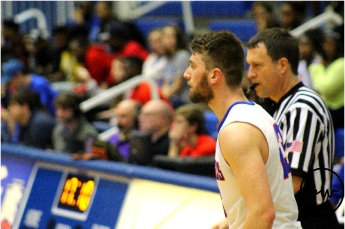 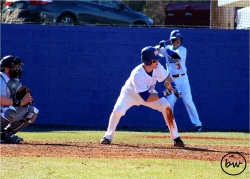 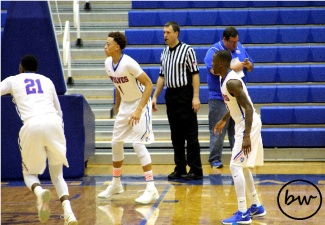 The West Georgia football team won their Gulf South Conference opener vs the Delta State Statesmen Saturday by a score of 34-24. This marks the 5th straight UWG victory vs DSU and makes it 6 out of the last 7. This also marks the 18th straight win for the Wolves at home, and continues Coach Will Hall’s undefeated home winning streak.

Both sides of the ball really seemed on their game as quarterback Will Gardner had four touchdowns through the air while the defense forced 5 sacks on Delta State’s All-Conference QB Tyler Sullivan.

Delta State received the opening kickoff and was stopped on a 4th and 3 attempt a couple plays later on the UWG 32 yard line. This allowed UWG’s offense to take over for their first time of the day. 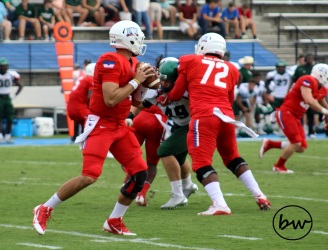 Will Gardner and the offense could not get anything going this drive, and they were forced to punt. Unfortunately for Wolves fans, the DSU punt block unit was successful and blocked the West Georgia punt before picking it up and returning it for a touchdown. UWG senior CB, Marcus Sayles, then blocked the DSU extra point, and this made the score 6-0 with 9:09 left to go in the first. This was the 1st time West Georgia had been down all season.

The rest of the 1st quarter didn’t go in the Wolves direction either, as they were forced to punt on their next drive. DSU took advantage of that and netted a 31-yard field goal to make the score 9-0 with 1:41 to go in the first.

UWG then threw an interception on their next drive that gave Delta State the ball on the UWG 45 yard line. This drive extended into the 2nd quarter and allowed DSU to put 3 more points on the board. This made the score 12-0 with 13:33 left in the opening half.

UWG’s offense struggled on the next drive as they were forced to punt yet again. However, the defense then did their job and made Delta State punt it back to the Wolves. This is when the offense finally got rolling.

They started on their own 27 yard line, and soon after the Wolves found themselves in the endzone. After a pass inference play on a long throw to Qa Walker, the Wolves were on DSU’s side of the field. #15, sophomore RB Devontae Jackson, then had multiple runs to get UWG down to the 14 yard line. Will Gardner then found his senior tight end, Walter Hibbler, for a 14-yard touchdown. This was a great play by Will as he was facing pressure and delivered a great ball to Walter off of his back foot.

This touchdown made the score 12-6 after the Hunter Heck extra point attempt was blocked. Delta State would then take over with 5:31 left in the half. Three plays later, Delta State was sending out the punt team to give the ball back to UWG. However, Marcus Sayles had other plans in mind.

As the snap sailed through the backfield into the punter’s hands, Sayles exploded off the corner and made his way around the wall to block the punt. This was his second block in the game and his 13th overall at West Georgia. He now has 3 on the year after just 3 games. Last year, he blocked 7 total kicks which led all of College football (DI, DII, & DIII).

Like Delta’s only touchdown in the first quarter, the Wolves picked up this blocked punt and took it into the endzone for a touchdown. #5, senior safety LAronji Vason, was in perfect position to catch the blocked punt and he returned it 19 yards to tie the game up at 12. Hunter Heck’s extra point was good and this gave West Georgia its first lead of the game with 3:20 left in the opening half. This was the last action of the first half and UWG took the one point lead into halftime. Both teams blocked a punt for a touchdown and both teams blocked an extra point in the 1st half. Other than that, it was pretty much a defensive battle.

The opening drive of the 2nd half started slow for the Wolves, as they were only able to manage 28 yards. This forced another Jordan Ikner punt.

Delta State started off exactly the opposite to open the 2nd half as they managed a 10-play, 81-yard drive that resulted in a 4th down touchdown. They converted on two separate 4th downs in this drive and took an 18-13 lead after the 2-point attempt failed.

West Georgia was forced to punt on the next drive giving the ball back to the Statesmen. Soon after, Delta State was facing a 4th and 1 situation at midfield. They decided to go for it, running the ball straight up the middle. What looked like a hole was closed very quickly by #4, sophomore LB Cameron Magee. He met the Delta running back right at the line with an enormous hit that had the crowd roaring. It stopped the fourth down short and gave West Georgia the ball on the UWG 45 yard line.

The next drive started with a short Will Gardner completion and then a 1st down run by Devontae Jackson. Gardner then hit Jackson for a 35-yard touchdown as he slipped out of the backfield. After the XP, West Georgia regained the lead by a score of 20-18. 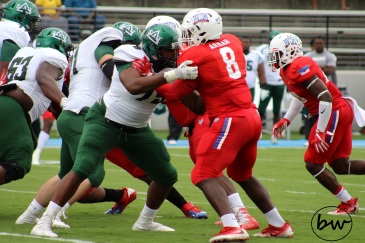 West Georgia’s defense then did their job as they forced the Statesmen to punt the ball back to Will Gardner and the offense. #9, senior RB Lamarcus Franks, got the majority of the work in the backfield on this drive as he had two runs for 23 yards total and a catch for 4 yards that moved West Georgia into striking position.

Will Gardner then hit #5, junior WR DeNiko Carter, for the 16-yard touchdown. Will threw it into the endzone and DeNiko made a great play on the cornerback, outjumping him for the score. This put the Wolves on top by a score of 27-18.

The defensive line made their presence known on the next drive as #49, senior DE Dylan Donahue, had a QB hurry on 2nd down and #94, junior DT Devlyn Cousin, had a sack on 3rd down. This forced Delta into a punting situation with 11:29 left in the 4th quarter.

Three minutes and six seconds later Will Gardner and DeNiko Carter linked up again for another touchdown. This time, the score came from 29 yards out as DeNiko made a diving catch in the endzone to score the touchdown. This gave Gardner his 4th passing touchdown of the day and gave Carter his 2nd receiving. It also gave their Wolves the 34-18 lead with 8:17 to go in the game.

Delta State managed one more touchdown as the game came to a close with West Georgia on top, 34-24. This gives UWG a 3-0 record on the year and they remain #3 in the AFCA Poll. They are still #2 in the D2football.com poll.

West Georgia’s offense had 361 yards on the day. 207 came through the air from Will Gardner. He was 18-of-30 with 4 touchdowns and 1 interception. His favorite receiver on the day was DeNiko Carter who had 4 catches for 59 yards and 2 touchdowns. Devontae Jackson added 4 catches for 62 yards and 1 score. #3, junior WR Qa Walker, was held to only 15 yards on 3 catches.

The leading rusher was Devontae Jackson. He had 16 carries for 96 yards. Lamarcus Franks added 14 carries for 63 yards. No one has really exploded in the backfield for West Georgia in a game yet, as no one has had a 100 rushing yard performance. However, when you have two guys who average roughly 70 yards a game, and have the depth to back those guys up, you don’t really need a star RB. Coach Hall has always been about spreading the ball around and this year looks to be no different.

The defense was outstanding on the day. They gave up 332 yards on 77 plays and only allowed the high-powered DSU offense to score twice. These were the first two touchdowns they had given up all year.

Special teams were phenomenal as I mentioned previously. They were directly responsible for one UWG score and they were able to block one Delta State extra point. Not to mention they were giving the offense great field position all game.

Dylan Donahue and Marcus Sayles were awarded Defensive and Special Teams Player of the Week Awards for their performances Saturday. Dylan had 6 tackles, 3 of which were for loss, and 2 of which were sacks. He was also getting after Tyler Sullivan at least once almost every drive. Marcus Sayles had 2 blocked kicks, 3 tackles, and multiple pass breakups. Laronji Vason led the way in tackles on the day with 9.

West Georgia will now travel to Albany State on Saturday. Kickoff is set for 7PM. West Georgia is 4-1 all-time vs Albany State. The Golden Rams are 1-2 on the year. They lost to Valdosta State 16-7 in week 1, lost to Tuskegee 28-18 in week 2, and then defeated Southeastern University 24-2 in Lakeland, Florida last week.

If the offense, defense, and special teams play as well as they did last week, then the Wolves should have no problems with Albany State.

You can listen to the game live by clicking this link or by tuning into Kiss 102.7 on your radios.

If you are a parent or relative of a player interested in purchasing photos, feel free to e-mail me. The pictures in this article are not all of the photos I took Saturday. So, do not hesitate to contact me to ask if I have any you may be interested in.

Thanks for reading. Go Wolves!