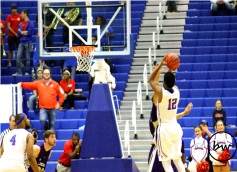 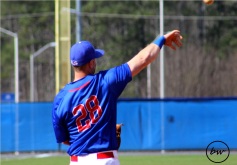 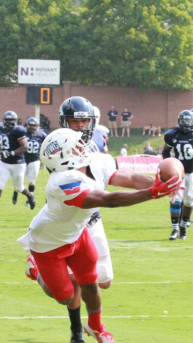 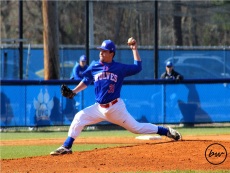 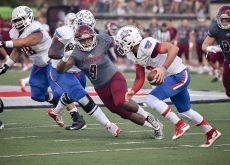 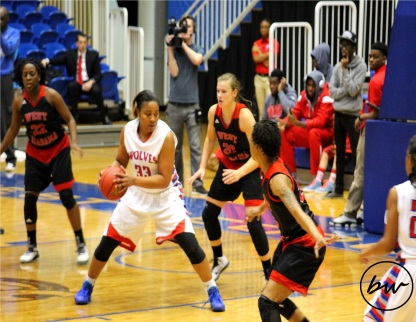 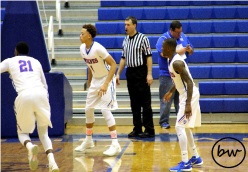 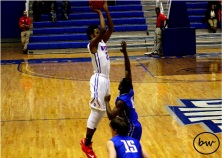 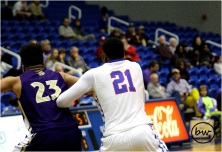 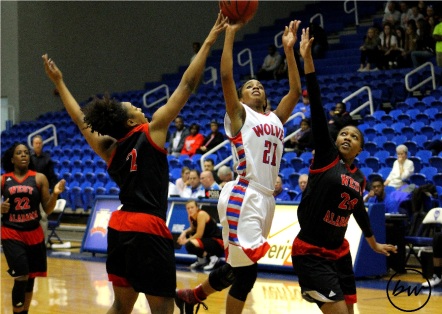 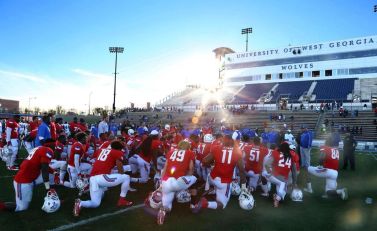 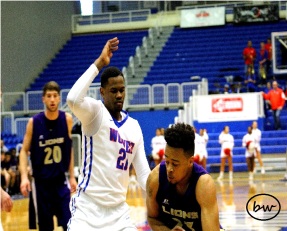 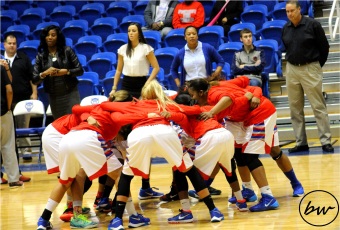 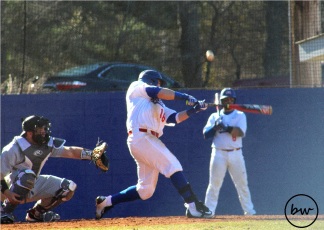 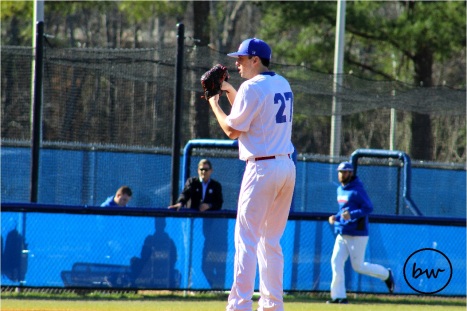 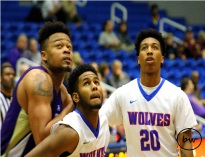 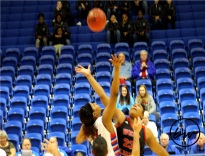 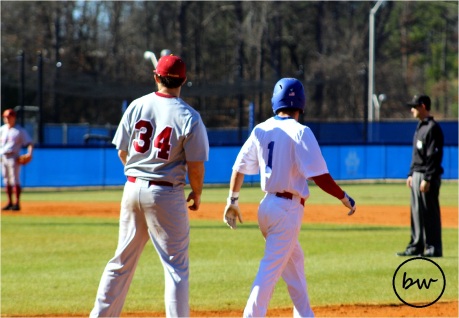 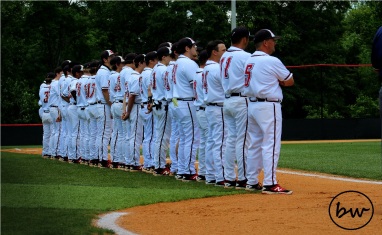 Bowdon was able to take game one today by a score of 8-6, but they fell in game two, 8-3. This split gives them an overall record of 28-2 and it puts them in a winner advances, loser goes home situation for tomorrow’s game 3 at 3 PM.

#25, junior Justin Ingle, was on the mound again for Bowdon in game one. Last week, he started off vs Oglethorpe and ended up pitching the entire 7 innings of that game. Today, he pitched 6 innings.

#3, senior Curt Eidson, started it off with a bang for Bowdon as he homered on the very first pitch he saw. He sent a high fastball deep over the wall in left field to give Bowdon the 1-0 lead. The momentum did not last long, though. This homerun was followed by two consecutive groundouts. 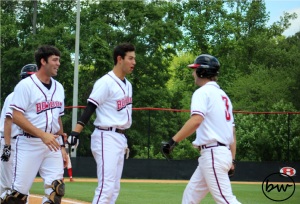 Then, #28, senior Matt Gresham, hit a single. This was followed by a double by #2, junior Reed Robinson. Unfortunately, both of those runners were stranded as the next Bowdon batter grounded out, ending the inning.

Thomasville could not get anything going off Ingle in the second either. The first three batters were retired and that gave Bowdon their second at bat.

#4, sophomore Trajan Brown, struck out for the first at bat. That was followed by a walk and then two consecutive flyouts. This put us in the third inning with Bowdon still on top, 1-0.

Thomasville’s bats came alive in the third inning as they scored 6 runs. It started with a runner reaching on an error, then a walk, then Ingle hit a batter. This loaded the bases with only one out.

Then, 3 runs were driven in by two consecutive singles. This gave the Bulldogs a 3-1 lead. The singles were followed by a flyout, which was the second out of the inning. Next, Thomasville hit a homerun of their own.  Unlike Bowdon’s, this was a 3-run shot giving the visiting team a 6-1 lead in the top of the third.

After regaining his composure, Ingle struck out the last batter to give Bowdon a chance in the 3rd. This was his 4th strikeout of the game. 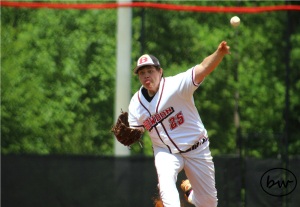 Reed Robinson started the inning off with a single for Bowdon which was followed by another single by #8, senior Aaron Bradley. Trajan Brown then flew out, but #16, freshman Cy Horton, doubled sending in two runs. This made the score 6-3. It was the only action in the inning and it moved us into the top of the fifth.

Ingle only faced 4 batters in this inning. The first two flew out, then one singled, then he struck one out. This put is in the bottom of the fifth.

#14, sophomore Colton Pitcock, started things off for Bowdon by hitting a lead-off double. This was followed by a groundout and a strikeout. Reed Robinson then hit a 2-out double of his own, bringing in Pitcock from second base. The next batter grounded out and this made the score 6-4 moving into the 6th.

Thomasville threatened to put up a couple more in this inning as they loaded the bases. However, Ingle got himself out of his own jam by getting the last batter to fly out, stranding three runners on base. We were now headed into the bottom of the 6th inning. 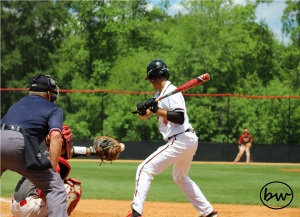 Trajan Brown started it off with a single for Bowdon. Then, Cy Horton was hit by a pitch. After that, #1, junior Levi Word, laid down a beautiful bunt. He ended up beating out the throw and it allowed Trajan Brown to score, reducing the lead to 6-5.

The next batter struck out for Bowdon, but Colton Pitcock then reached on an error that scored two runs. Bowdon was now back in the lead by a score of 7-6, and still threatening. A groundout then ensued but that was followed by a Matt Gresham RBI single. This was the last action of the inning and the tables were now turned. Bowdon was up 8-6 at this point, moving into the seventh inning.

Reed Robinson came in to close out the game for the Red Devils. Things got a little scary as the Bulldogs were able to load the bases in this seventh inning, but Robinson was able to close them out without allowing a run. His save gave his team a 28-1 overall record, and a 1-0 series lead on Thomasville.

Justin Ingle pitched 6 innings for Bowdon. He gave up 6 hits, struck out 7, walked 2, and gave up 5 earned runs. Take the 3-run homerun away and he pitched a near perfect game. That was all for game one, and game 2 started 45 minutes later.

Bowdon would bat first in this game due to the GHSA playoff rules. Curt Eidson again started it off for the Red Devils by getting on base. This time, he walked. He then reached second while Colton Pitcock was up to bat. 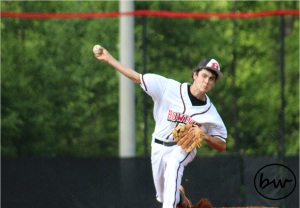 Pitcock then laid down a bunt and was thrown out at 1st base. However, Thomasville tried to get Eidson when he advance to third and the ball escaped the infield allowing Eidson to make it home. This was the only action of the inning and it gave Bowdon the early 1-0 lead.

Just like last week, #35, junior Cade Geter, started game 2 on the mound for Bowdon. Last week, he ended pitching 3 innings, not allowing any hits or walks, while striking out 5. Today, it was a different story.

Geter walked the first batter and then allowed a double on the second batter. He then got the third to fly out. The fourth batter hit a pop up to left field. After the ball was caught, a beautiful throw was made to get the runner tagging from the third. #8, senior Aaron Bradley, caught the throw and made  diving tag attempt that proved to be successful. The double-play sent us into the top of the 2nd inning.

The first two BHS batters were retired but then Levi Word reached on a walk. Unfortunately, they couldn’t put up any runs in this inning as their only chance (Levi Word) was caught stealing at 2nd base to end the at bat. 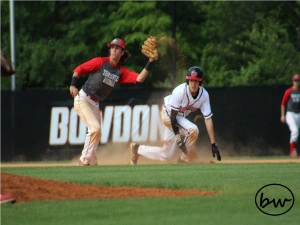 Geter then struck a guy out for the second out. Now, with runners on 2nd and 3rd base, another single was given up that allowed a run to score. This gave Thomasville the lead. Luckily for Bowdon fans, it was the only run of the inning. Heading into the 3rd inning, their team was down 2-1.

After Curt Eidson struck out, Colton Pitcock reached on an error. #18, junior Jake Gilley, then singled which allowed Pitcock to score on a bad throw. Gilley then made it all the way to third base. After that, Matt Gresham was hit by a pitch.

Reed Robinson was able to get a bunt down on the next at bat and Gilley scored, but Robinson was thrown out at first for the second out of the inning. This gave Bowdon the lead, 3-2.

Thomasville was now behind again, but that did not last very long. They were able to load the bases and then capitalize. A double with the bases loaded allowed 2 runs to score and it gave them the 4-3 lead.

This moved us into the 4th inning, where Bowdon didn’t get anything going. However, Thomasville was able to score a run in this inning. Moving into the 5th, it was 5-3 Bulldogs.

Bowdon started off the 5th inning with some life as Pitcock singled, but then Jake Gilley hit into a double play. Matt Gresham then struck out, which ended the at bat.

Thomasville couldn’t get anything going in this inning either. Heading into the 6th, it was still 5-3 with Bowdon on the losing end.

Now with only two innings left to tie it up, Bowdon had to get something going. Aaron Bradley getting hit by a pitch and Cy Horton hitting a double allowed two runners to reach second and third, but in the end Levi Word struck out. This stranded the two runners on base and put us into the bottom of the 6th.

Thomasville took advantage of the Bowdon’s lack of runs in the 6th and put up 3 more of their own. A single was followed by a sacrifice bunt that moved the runner to second base. Then, a double ensued which allowed the first runner to score. After that, Thomasville hit a 2-run homerun which made the score 8-3.

Now, heading into to the 7th inning, Bowdon was down by 5 runs, a situation that they are not familiar with. Unfortunately, the only runner that reached base in their last at bat was by a walk. After failing to score 5 runs, the game ended and Bowdon received their second loss of the year.

Bowdon is now 28-2 on the year and has a pivotal game 3 matchup set for tomorrow. The winner will advance to play in the quarterfinals and the loser’s season will end. The winner of this series will play either Benedictine or Greater Atlanta Christian. Those two teams split their series today as well with Benedictine taking the 1st game 15-2, and GAC taking the 2nd game, 4-3. Their game 3 is set for tomorrow as well.

You’re more than likely going to see #6, junior Daniel Gibbs, on the mound for Bowdon tomorrow in game 3. First pitch is set for 3 PM.

You can find an updated AA baseball playoff bracket by clicking this link.