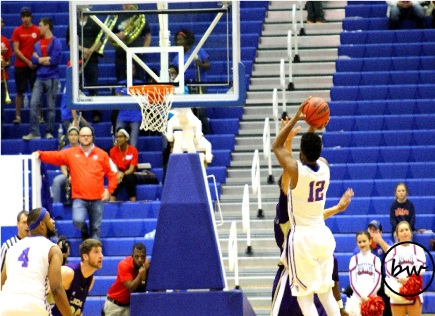 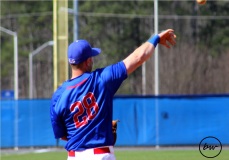 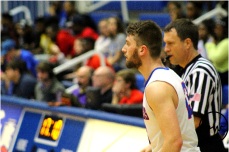 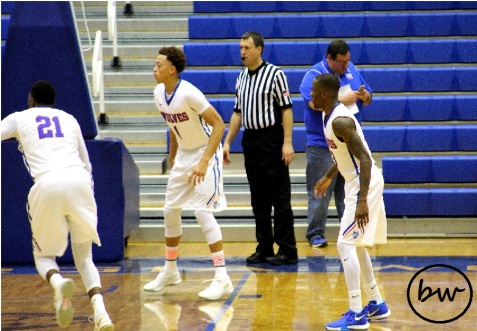 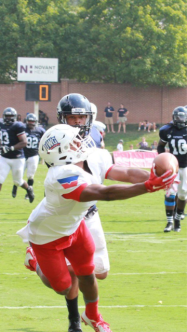 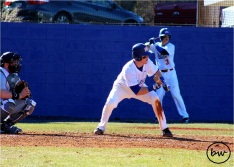 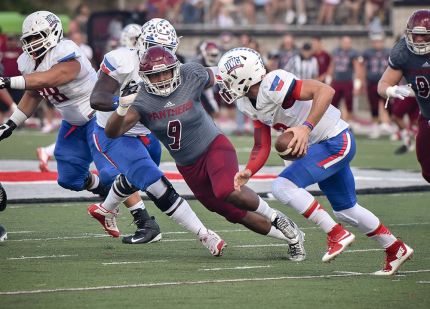 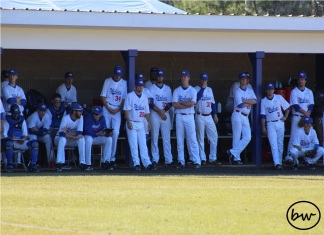 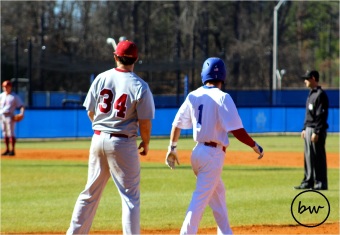 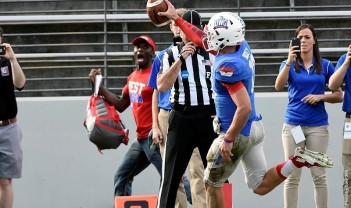 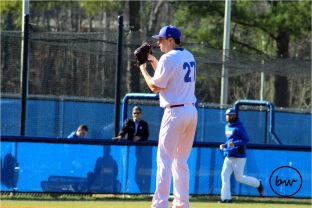 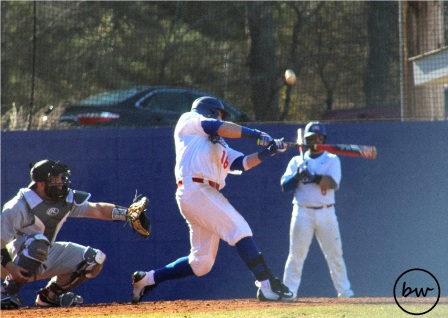 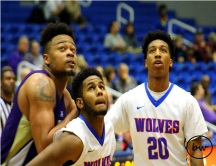 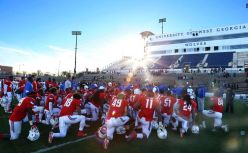 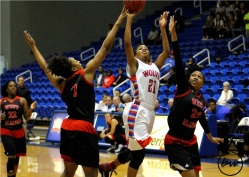 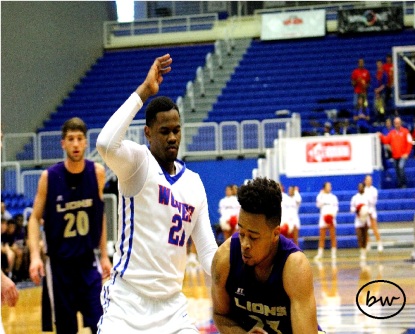 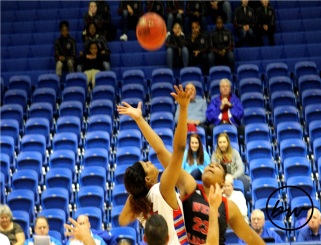 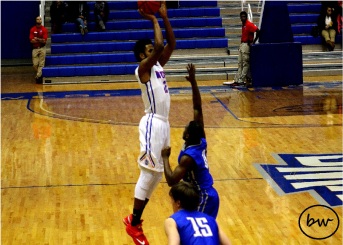 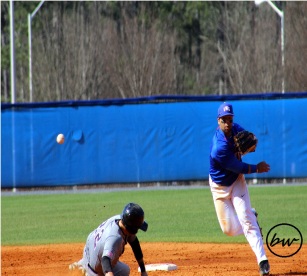 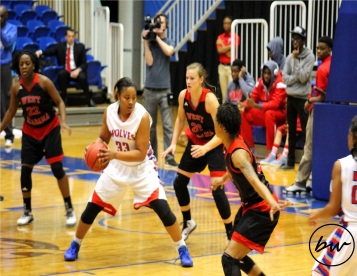 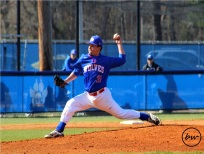 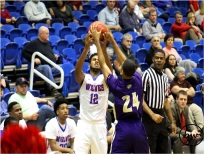 Bowdon High’s baseball team was in action today in the 1st round of the AA state playoffs. Bowdon achieved a 25-1 regular season record that made them Region 5AA Champions. They were 25-0 before losing their last game of the season to Heard County.

This spectacular season gave them a #1 seed heading into the State Playoffs and it paired them up with the #4 seed out of region 8AA, Oglethorpe County. Today, games 1 and 2 were played and game 3 was scheduled for tomorrow, Saturday the 30th.

It seems game 3 won’t be necessary as Bowdon won both games today in convincing fashion. The first game was won 8-3 and the second game was won 19-0 after four innings. 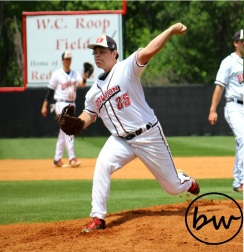 #25, junior Justin Ingle, got the start in game one and had a no hitter going through the first couple of innings. Neither team could get on the board in the 1st, but Bowdon was able to load the bases.

The same was true for the 2nd inning as neither team got in the board. In the 3rd, Bowdon retired the first three Oglethorpe County batters and then it was their turn to bat.

After the first BHS batter flew out, #18, junior Jake Gilley, doubled. That was followed by a fly out to 3rd base. Now, there was a man on 2nd with two outs for Bowdon. #2, junior Reed Robinson, then doubled which brought home Jake Gilley to make the score 1-0.

This double was followed by another double from #8, senior Aaron Bradley. Bradley’s double brought home Robinson from 2nd and made the score 2-0. #4, sophomore Trajan Brown, then reached on an error which also brought in a run. This made the score 3-0 and was the last run of the inning as the next Bowdon batter flew out.

Now in the top of the fourth, Oglethorpe County still had no hits. This changed when the first batter of the inning singled to left field. Unfortunately for the Patriots fans, the next batter hit into a double play and the one after that struck out.

#1, junior Levi Word, started off the fourth for Bowdon by reaching on an error. It was a perfectly laid bunt that he may have beat out anyway. The next batter, #14, sophomore Colton Pitcock, also laid down a beautiful bunt that allowed him to reach base. 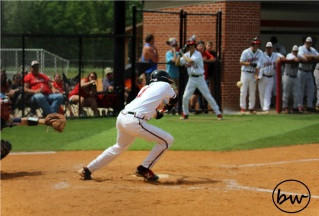 #3, senior Curt Eidson, then tried to advance the runners but he ended up bunting into a fielder’s choice that resulted in Levi Word being thrown out at 3rd base. There were now runners on 1st and 2nd with one out.

Jake Gilley then came in and doubled, sending a run home and putting runners on 2nd and 3rd base. #28, senior Matt Greshamn, then laid down a bunt that allowed Colton Pitcock to score from third.

There were now runners on 1st and 3rd for Reed Robinson. He ended up hitting into a fielder’s choice, but had an RBI on the play. The score was now 6-0 in favor of Bowdon.

Aaron Bradley then came in huge for the Red Devils as he hit a 2-run blast over the wall in left-center of Bowdon’s Roop Field. This made the score 8-0 in favor of the home team. This was also the last action of the 4th inning, giving OCHS their chance to bat in the 5th. 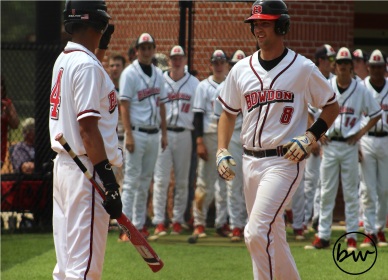 Neither team scored in the 5th inning and it was now the 6th inning and OCHS was due up. Down 8-0, they had to get something going or the game would be over. The first batter grounded out, but the next two batters both singled. Ingle then struck one out and now had two outs but two runners still on.

The next batter doubled, sending in Oglethorpe County’s first run of the game. It was the only run they got in the inning and heading into the 7th it was Bowdon up, 8-1. Bowdon did not get anything going in the bottom of the 6th.

Now facing defeat, Oglethorpe was able to put together a small comeback, but the charge fell short and Bowdon won the game, 8-3. 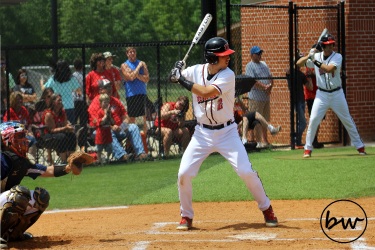 Justin Ingle got the win for the Red Devils. He pitched a stellar 7 innings, giving up 3 runs, 6 hits, striking out 5, and walking only one. Bowdon ended with 9 total hits compared to OCHS’s 6. Each team had two errors in the game.

Now up 1-0 in the series vs Oglethorpe, Bowdon had some confidence, as if their near perfect regular season wasn’t enough.

The second game was a dismantling of Oglethorpe by Bowdon. It only lasted four innings, but Bowdon still managed to put up 19 runs on 11 hits. Three homeruns were hit in this game by Bowdon, two from #16, freshman Cy Horton. 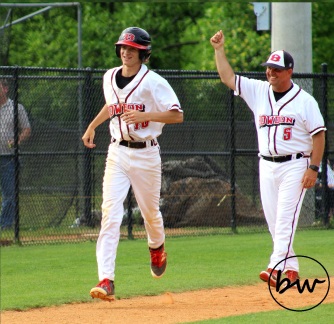 The first HR came in the 1st inning when Bowdon was already up 2-0. This wasn’t just any homerun, it was a grand slam that made the score 6-0. Heading into the bottom of the 1st, the game was already looking as if it would be a blowout. (Bowdon was the away team in Game 2, even though they were playing at home).

#35, junior Cade Geter, was on the mound for Bowdon in game 2 and he also pitched an excellent game. He got the first two batters to ground and fly out respectively, then he struck out the 3rd. 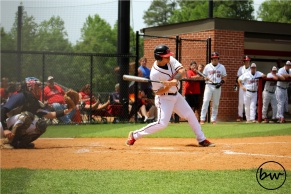 In the top of the 2nd inning, Bowdon added 3 more runs. It started with Jake Gilley getting hit by a pitch. The next two batters flew out, but that didn’t stop the Red Devils. Aaron Bradley singled which brought in Gilley. Then, Trajan Brown hit a 2-run homerun which made the score 9-0.

Now in the bottom of the 2nd, OCHS was down big. Their first batter was hit by a Cade Geter pitch, but the next two were struck out by Geter. Then, the 4th batter grounded out. Heading into the 3rd inning, Bowdon was up 9-0.

BHS added 5 more runs in the top of the 3rd, 2 of them came from Horton’s 2nd homerun of the day. Two more came from Aaron Bradley reaching on an error, but getting two RBIs on the play. The last one came by way of RBI from Trajan Brown. 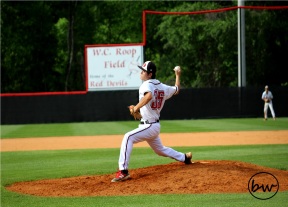 OCHS ended game 2 with only one hit and they committed three errors. Bowdon had 19 runs on 11 hits along with 3 homeruns in game two. Cade Geter pitched only 3 innings but allowed no hits and no walks. He struck out 4 batters and got the win.

Bowdon clearly showed that they were the more dominant team today. They will move on to face the winner of the Monticello High and Thomasville High series. The series will take place at Bowdon. It will begin May 4th and will finish on the 5th if necessary.

A full GHSA AA playoff bracket can be found by clicking this link.

2 thoughts on “Bowdon Sweeps Oglethorpe County, Advances to 2nd Round of AA Playoffs”